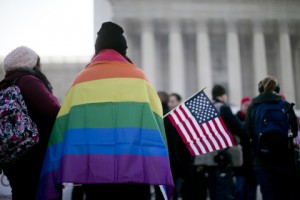 In the last week, national news has been rampant with stories detailing the recent same-sex marriage cases that have come before the U.S. Supreme Court. Family law attorneys, including those at Miller Bowles Cushing, are watching the proceedings closely to determine if the Court makes a decision that affects not only marriage equality but also divorce equality in America.
 
The U.S. became a patchwork of laws over the last decade when states began taking the issue of same-sex marriage into their own hands. Some states, such as New York and Massachusetts, legalized same-sex marriage, while others, including North Carolina, completely prohibited it and other legal unions among same-sex partners. Meanwhile, the federal government further muddied the waters by enacting the Defense of Marriage Act (“DOMA”), which treats issues such as taxes, inheritance, and pensions differently for same-sex couples. The result of these differing laws is an interesting legal conundrum for same-sex partners and their family law attorneys – once a gay couple is married, can they divorce wherever they wish? If not, what are their other options?

As reported by New York Magazine, same-sex partners are at the start of a “divorce boom”. According to a report by UCLA’s Williams Institute, the marriage rate of gay couples has been rising quickly over the last few years, which has inevitably led to a rise in divorces as well. However, with the rise of divorces come some significant legal quandaries that have family law attorneys scratching their heads. For example, assume a gay couple marries in New York, and then moves to North Carolina where their marriage is not recognized. The couple essentially becomes “wedlocked” in North Carolina. Like North Carolina, the majority of states that do not recognize same-sex marriage also do not recognize same-sex divorce. Furthermore, many states, North Carolina included, have a residency requirement to obtain a divorce. Therefore, if these same-sex couples want to divorce, their only real option is to move to a state that recognizes their marriage, and live in that state for the required amount of time. Clearly, this is not a favorable option for many.

Besides moving to a state that recognizes same-sex marriage, gay couples have a few other options. The first is to just end the relationship without getting an actual divorce. However, according to family law attorneys, including those at Miller Bowles Cushing, this route comes with its own share of problems. As illustrated by Forbes, the first major problem arises when the couple begins splitting assets. In splitting these assets, the couple may incur a substantial amount of income taxes, gift taxes, or both. Furthermore, as illustrated by New York Magazine, if the couple neglects to make a living will or healthcare power of attorney, one former spouse may be able to inherit from or make end-of-life decisions for the other. Additionally, if one former spouse has a child with a new partner, there may be a marital presumption that the other former spouse is the parent of that child. And finally, if one former spouse chooses to wed again, he or she could be considered a bigamist. Because of these possible hiccups, family law attorneys typically advise against ending the relationship without obtaining a divorce. However, there is another option generally more favored by family law attorneys. Gay couples may attempt to engineer methods of dividing the marital property and establishing custody through separation agreements or restructuring the couple’s union as a business partnership or joint venture.

While same-sex couples have been attempting to work around the system, family law attorneys have been busy fighting the system. Susan Sommer, director of constitutional litigation for Lambda Legal and quoted heavily on this issue in New York Magazine, argued successfully in New York and in Maryland for the establishment of the right for gay couples married elsewhere to obtain a legal divorce in those states. Just this week, two cases have been brought before the U.S. Supreme Court challenging the constitutionality of California’s Proposition 8 and DOMA. While the outcome of these cases will likely not be known until the summer, if the Court strikes down DOMA, many of the biggest impediments to same-sex divorce will cease to exist.

Family law attorneys like those at Miller Bowles Cushing are paying close attention to the outcome of the cases currently before the U.S. Supreme Court. Needless to say, the decisions made by the justices in the next few months could have a significant effect on how family law attorneys handle same-sex divorces in the future. However, regardless of the decision made by the Court, gay couples should always speak with a family law attorney about their options regarding divorce, equitable distribution, child custody, and other related issues. A family law attorney can help these couples navigate the complex legal issues facing them and move forward with their lives in a positive manner.